African Studies in China: Past, Present and Future 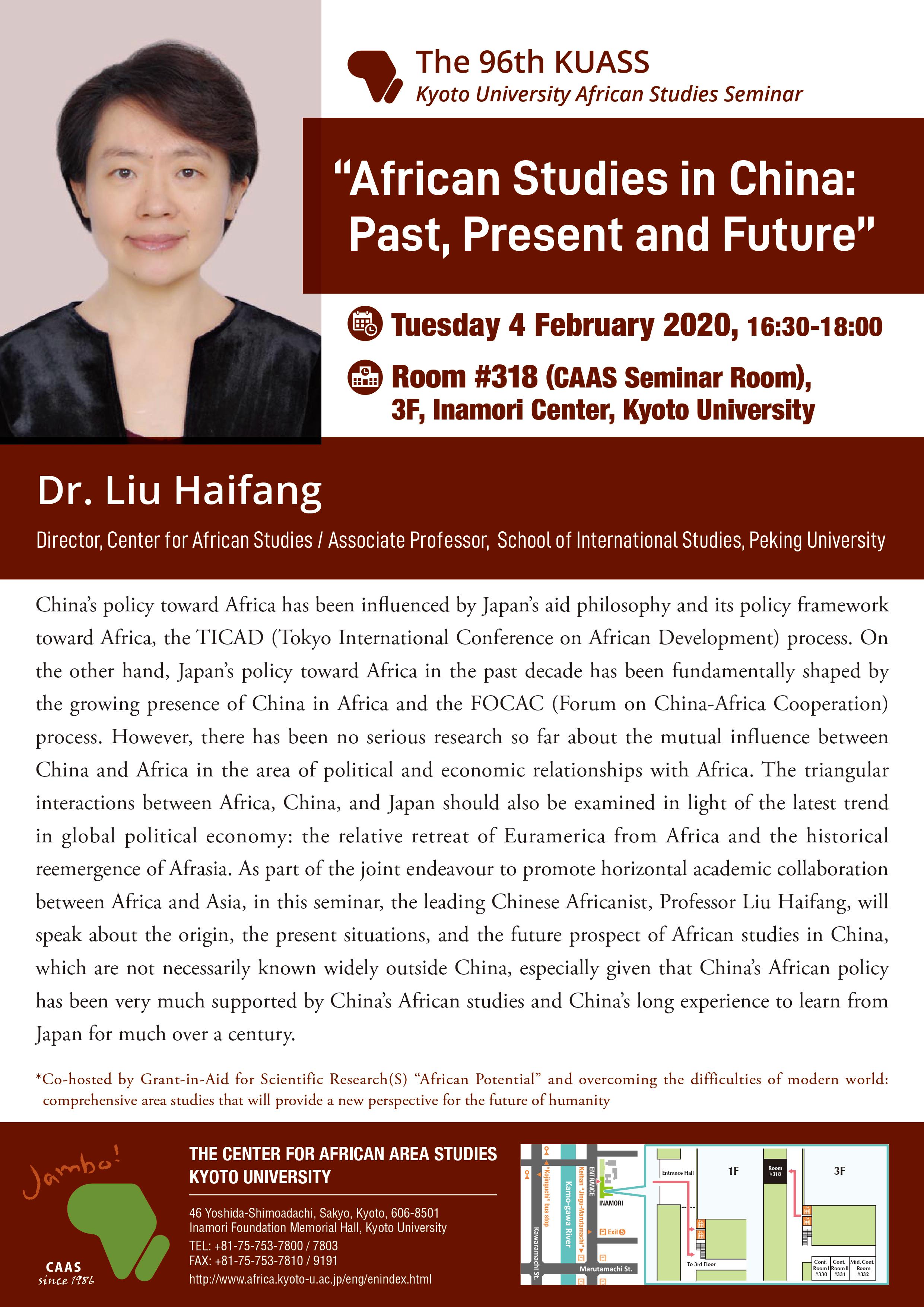 China’s policy toward Africa has been influenced by Japan’s aid philosophy and its policy framework toward Africa, the TICAD (Tokyo International Conference on African Development) process. On the other hand, Japan’s policy toward Africa in the past decade has been fundamentally shaped by the growing presence of China in Africa and the FOCAC (Forum on China-Africa Cooperation) process. However, there has been no serious research so far about the mutual influence between China and Africa in the area of political and economic relationships with Africa. The triangular interactions between Africa, China, and Japan should also be examined in light of the latest trend in global political economy: the relative retreat of Euramerica from Africa and the historical reemergence of Afrasia. As part of the joint endeavour to promote horizontal academic collaboration between Africa and Asia, in this seminar, the leading Chinese Africanist, Professor Liu Haifang, will speak about the origin, the present situations, and the future prospect of African studies in China, which are not necessarily known widely outside China, especially given that China’s African policy has been very much supported by China’s African studies and China’s long experience to learn from Japan for much over a century.

Dr. Liu is an Associate Professor in School of International Studies, Peking University. She serves as Director of the Centre for African Studies, Peking University, and the Vice President of the Chinese Society of African Historical Studies. She previously worked for the Institute of West Asian and African Studies (IWAAS), the Chinese Academy of Social Sciences and a visiting scholar at University of Oslo, the Institute of African Studies, Carleton University, Stellenbosch University (South Africa) and The Institute of Social Studies in The Hague. Dr. Liu has authored, edited and translated numerous publications in English and Mandarin, including books such as The Transformative Development of Africa & South- South Cooperation in Agriculture Sector (both English and Chinese versions), Beijing Forum 2017: Emerging trends in Sino-African Development Cooperation, Special Agricultural Foreign Direct Investment in Zambia (both English and Chinese versions), General History of Africa, Angola. She has contributed chapters on aspects of China’s comprehensive presence in Africa to several volumes published by Zed, Brill, Palgrave, Fahamu Publishing House and Routledge. She also has contributed to international academic journals as both reviewers and authors. Liu’s current research topics include New Migrants between China and Africa, Chinese company history in Africa, African perceptions of China and Chinese migrants, Chinese Aid, China-African relations, African sustainable development studies and contemporary Africa’s International Relations. She teaches courses like Comprehensive African Studies, Introduction to Africa, African Politics and International Relations, Sino-African relations, Theories on Afro-Asian Studies, Chinese Perspectives on Global Migration both in English and Chinese in Peking University.

Grant-in-Aid for Scientific Research(S) “African Potential” and overcoming the difficulties of modern world: comprehensive area studies that will provide a new perspective for the future of humanity 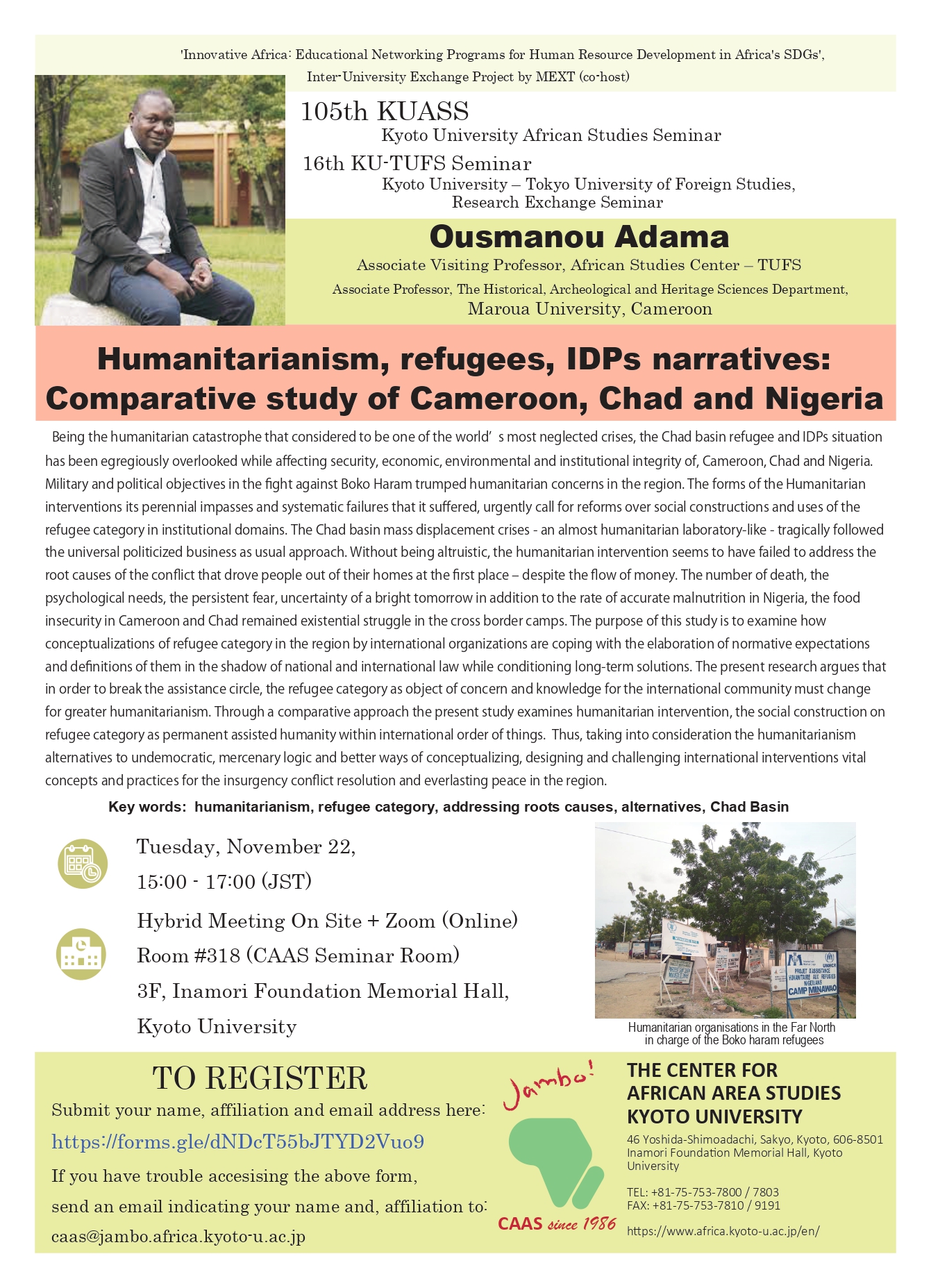 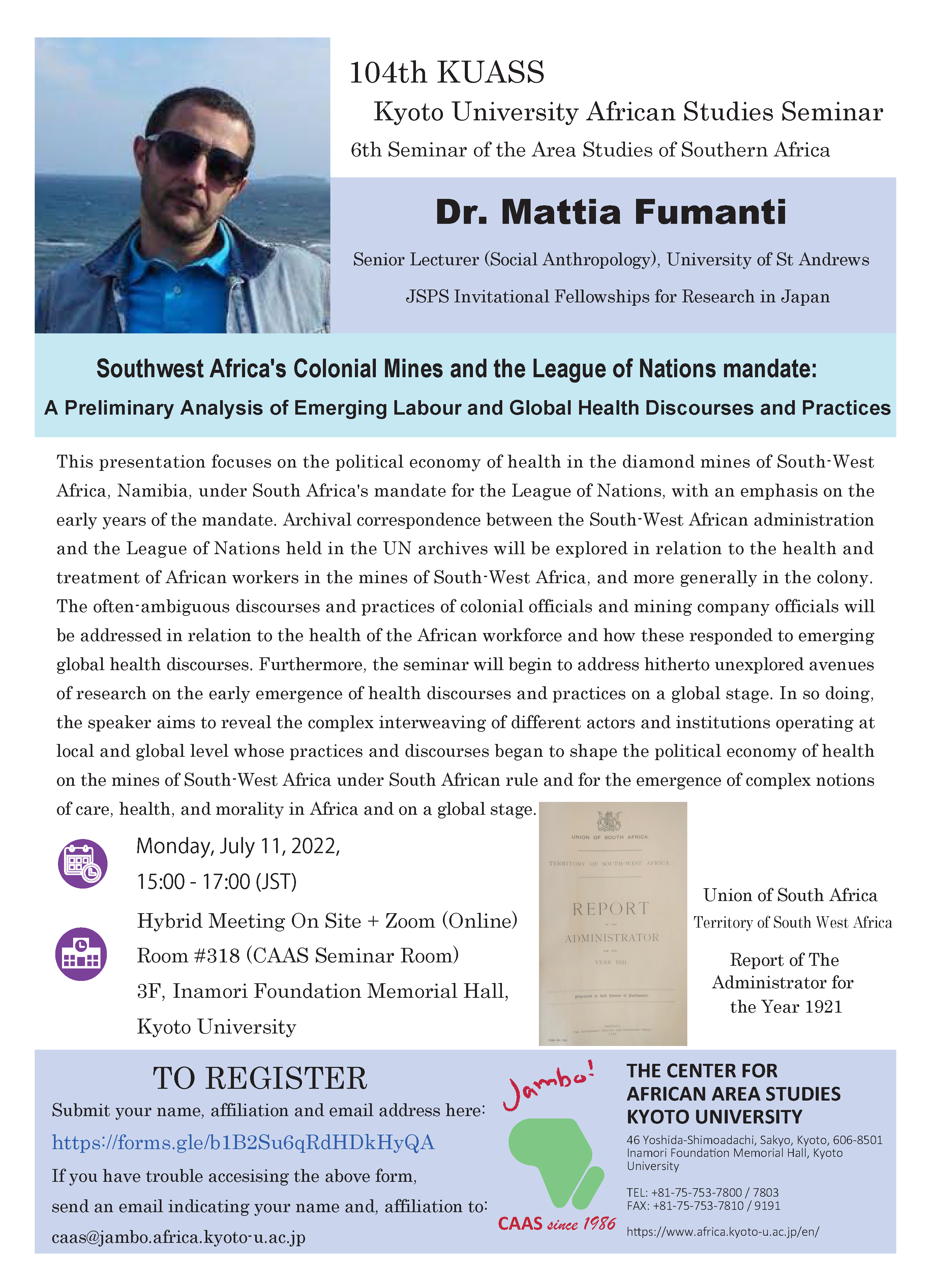 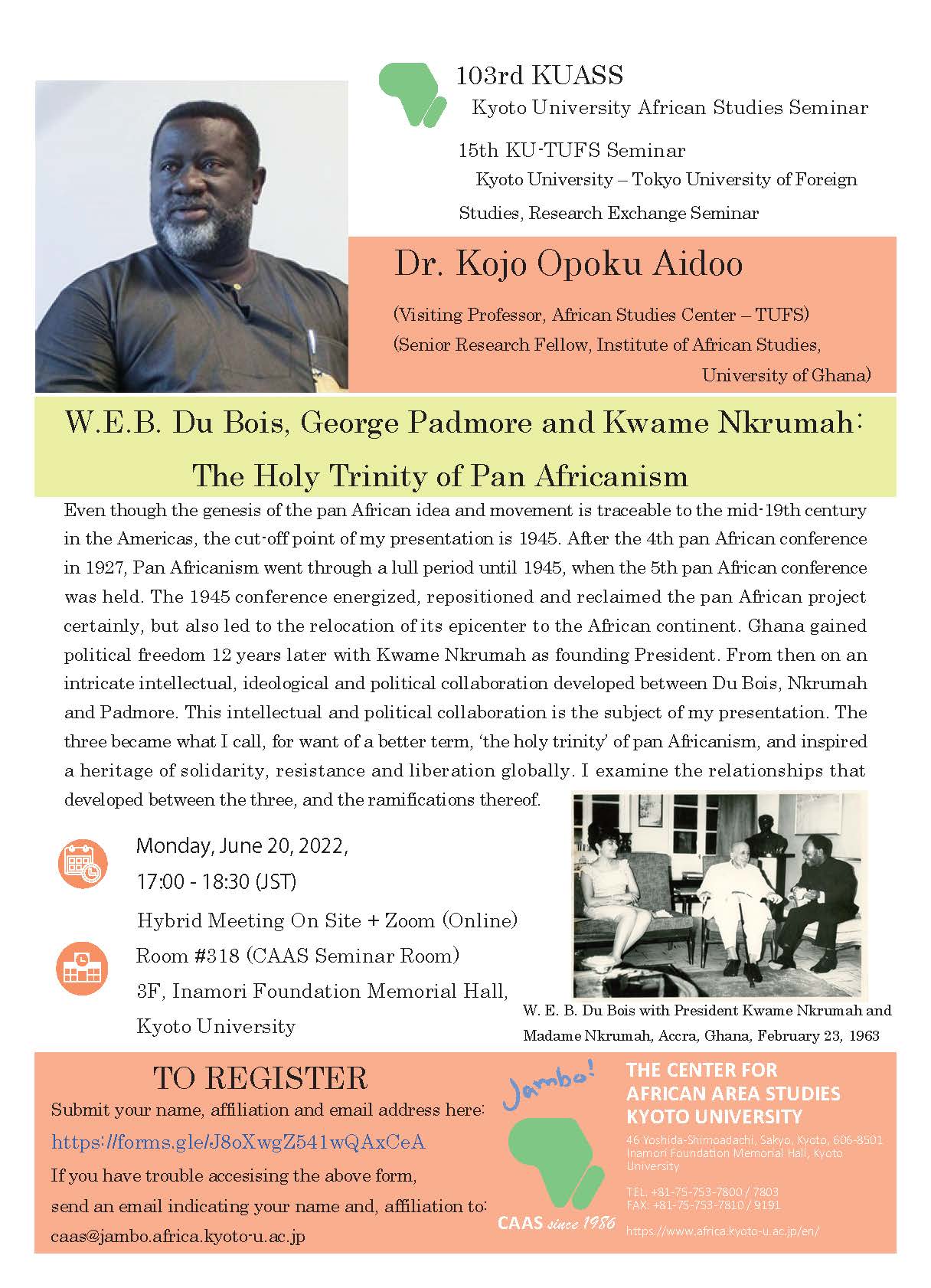 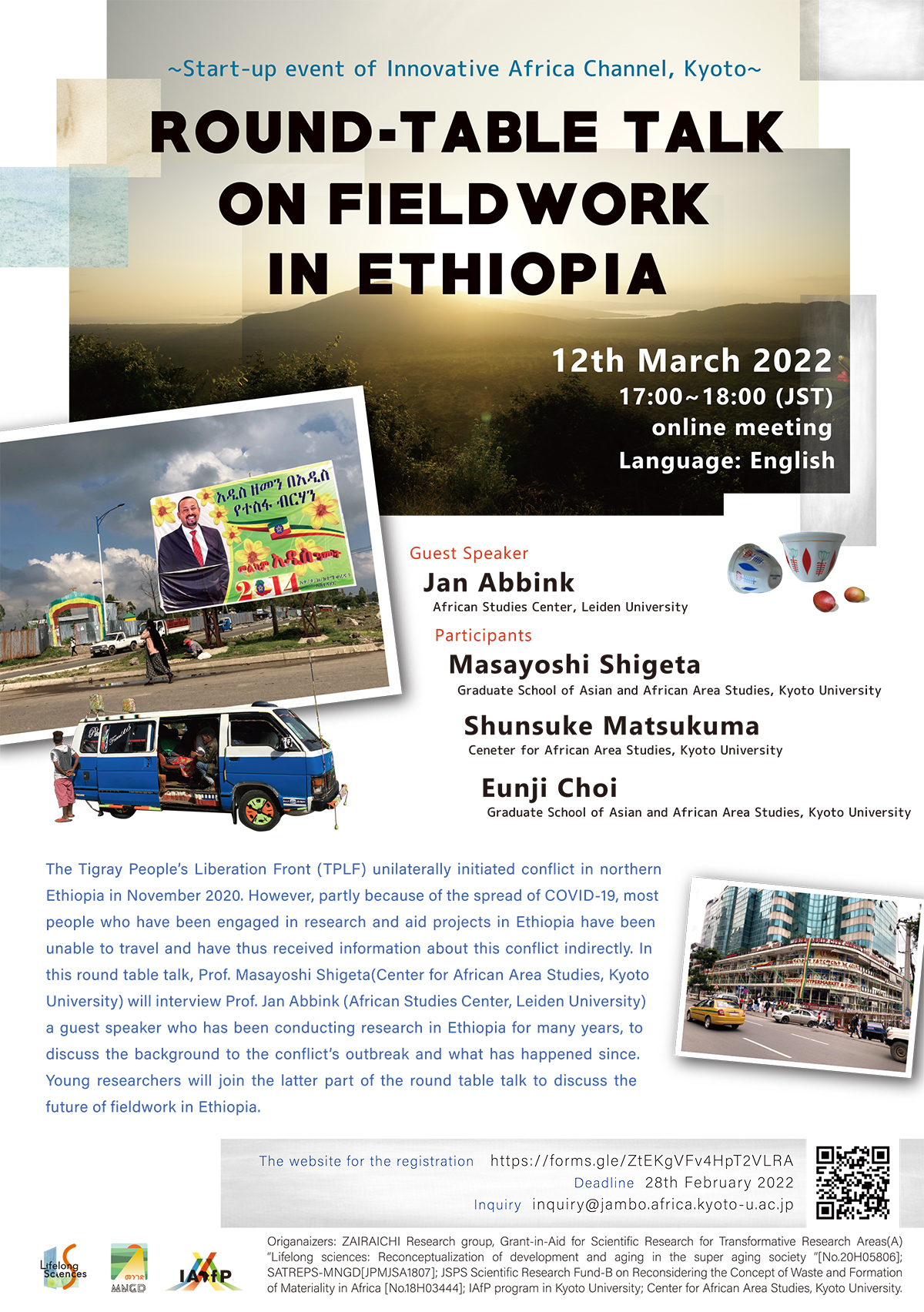 Round Table Talk on Field Work in Ethiopia 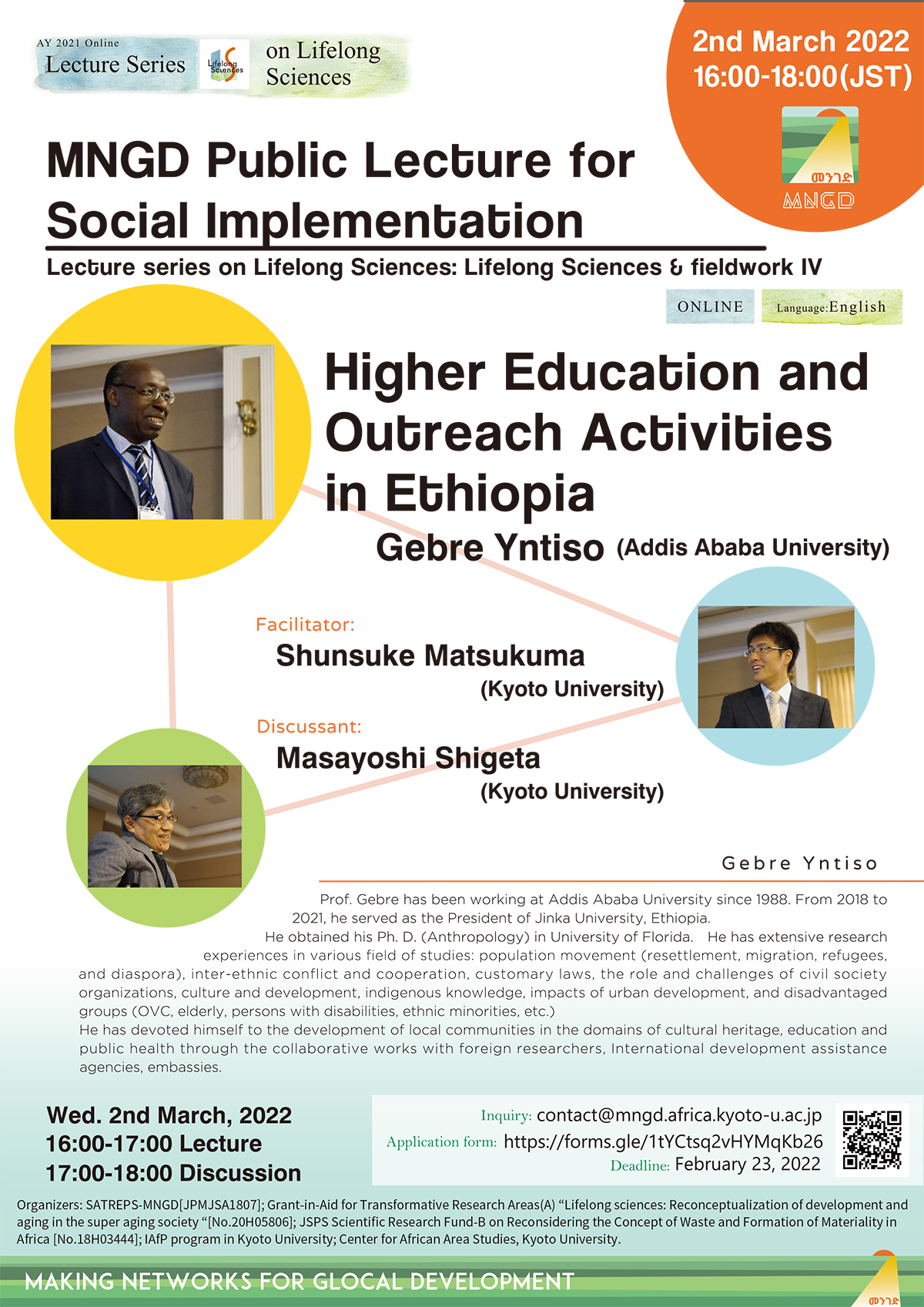